My eldest gave me a record player for Christmas.  Which I am loving for a lot of reasons.  At some point, I gave him all of my vinyl - and all of my father's vinyl.   Which I am going to get back soon - even though I am not going to go up into his friend Ant's attic to search through all of the hundreds of albums he has stored up there. 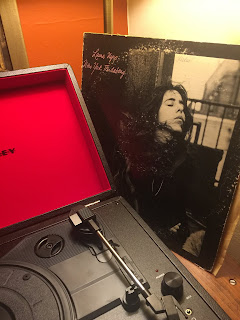 In the meantime, I have one album, which is a great album to have if you only have one.  Laura Nyro's New York Tendaberry  Originally released in 1969 - I remember spending hours and hours listening to it, so rich with sound and her vocals soaring through them - like one crazily vocal bird or an entire murmuration.

The lyrics of Time and Love...I am reminded of what a touchstone they have always been for me.  Both then, and hearing them again, now.  A panacea to what we are going through, for sure.


So winter froze the river 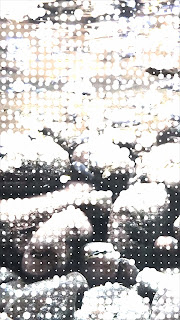 Early on I was able to see her twice in Detroit.  Once at the University of Detroit, in the Memorial Union - which I remember as a gym.  She and her piano were on risers and we sat in the round - I was very, very close to her piano.  It was remarkable.  The other time was at Masonic Temple, also a great venue - but more traditional.

I've missed the rhythm of how an album is set up.  I've missed the kind of focus it requires...and I've even missed having to get up and turn it over.

Those nights when you long to be Ireland 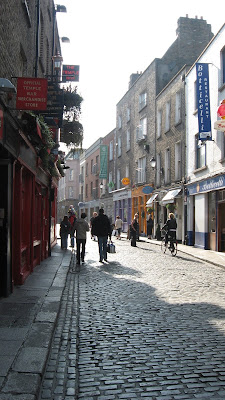 Between the Jigs and the Reels

Between a jig and a reel
what is there?
Only one beat
escaped from a ribcage.

Tunes are migratory
and fly from heart to heart
intimating
that there's a pattern
to life's pulls and draws.

the rhythm of Cooley's accordion
which could open a heart of stone,
John Doherty's dark reels
and the tune that the sea taught him,
the high parts of the road and the underworlds
which only music and love can brave
to bring us back to our senses
and on beyond. 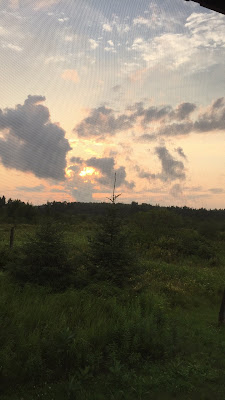 Bats.
When the sun goes down and the birds are quiet, the bats come out.  The light from the porch sends a warm glow and the bugs are attracted to the screen.  Slivers of black flash back and forth.  The bats in the last dimming of evenings light.

It’s already ten pm - long days a gift this time of the year.  No fog tonight and in an hour the Milky Way will strew itself across the sky.  Perseus meteor showers are really kicking into gear as August begins.  The flowers blooming now: tansy, milkweed, black-eyed susans and queen annes lace.  Lacey cream and golds, with pops of pink and magenta -  late summer  palette.

Tonight the moon rose like a solid gold orb - as it rose so did the fog, and each one made the other even more ethereal than they already were.  An owl hooted from the forest as if announcing the event.  Up in the sky meteors flashed back and forth like little space fireworks.

Sitting in the yard, alone tonight, all the other nights together become one rich night.  My brother Matt, bringing a telescope, setting the coordinates and having it automatically position and focus.  We each took turns looking at whatever he was having us turn our attention to - always oohing and aahhhing.  Another year he's checking an app on his phone and we're all running outside to look at a satellite passing far overhead.   Each small child learns where the big dipper is and sees Venus, low on the western horizon.

“Starlight, starbright - first star I see tonight.  I wish I may, I wish I might - have the wish I wish tonight.” 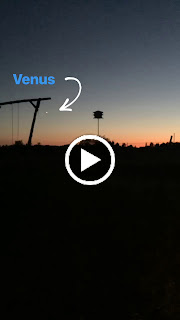 The cabin is the closest I get to my childhood home these days.  The dresser in the room I sleep in at the cabin was mine as a child.  It is the one that my mom and Mike Roberts redecorated one summer.  I was up in Houghton Lake - came back and they had repainted it white with blue and green details (color combo of the day…late sixties)  I walked in and saw it - plus a Seargent Pepper Lonely Hearts Club Band album laying on the bed - still in the plastic shrink wrap.  What treasures.  Dad was in the hospital and life was a bit bleak - but I knew I was loved. 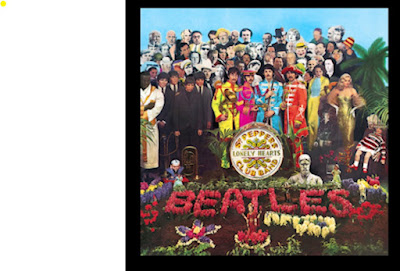 I was rummaging through the “everything drawer” looking for something or other earlier today.  This set of drawers was originally part of a built-in against the wall in my parent’s bedroom.  Part of a new addition that our neighbor  Jim Horton worked on.  There was a bedroom for me, and another for my parents.  There was also a small closet with a folding door with a very cool handle, where my father kept his coats and umbrella…..anyway, I digress.  In the drawer was a jar that my mom kept stamps in.  Quite a collection - some of them I was familiar with and remembered using…..others, I hadn’t seen before….and one of them (this quote by Pulitzer) a timely surprise.  It also led to a slew of other memories. 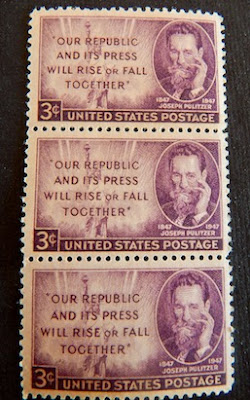 My addiction to political news can be traced back to mom.  When I hear my granddaughter Muriel breaking into a Betty Boop song,  I see my grandmother Alma singing and whistling this song in her kitchen. standing in front of the sink doing dishes.  My mother, in her kitchen, watched the news.  She was not a Conkrite person.  We watched Huntley and Brinkley every night.  As I came of age - we watched the history of the time unfold, mostly in black and white.  The assassinations - she adored the Kennedys, she adored MLK.  She was not an activist by any means - she hadn’t the time (five kids and a husband with mental health struggles), nor the inclination.

But she (and my father) were in support of civil rights and it was never something to be argued about in our house.  By this time I was beginning high school and the Dominican nuns that Hank spoke so highly of were radicalizing his oldest in ways he didn’t yet realize. 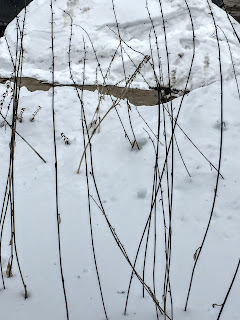 It's not even mid-April anymore, it's past that.  First day of Spring?  Long gone.  We had a few days where you could go outside and rake the flower beds, things were sprouting - looking green.  The feeder was visited by RED and GOLD finches, cardinals, along with the junco's, woodpeckers, chickadees, and nuthatches.  And robins.  Robins are "always" a sign that the weather has turned.  Not this year. 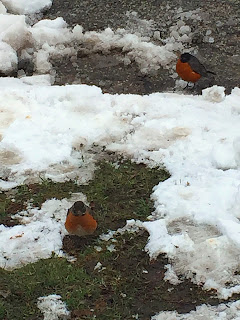 John and I saw a couple as we walked to the car the other day.  We knew they were suffering because they were lethargic and puffy.  They had found the one place on the lawn where the snow had not covered everything...and they were looking for worms.  Neither of us held out much hope that they would find anything - but as we stood next to them and watched, one pulled out a long worm and the two of them feasted.
"They're really having a tough time. When you see them puffed up, that means that they're trying to hold in that body temperature. So that's the time you can walk up to them, get them, and bring them in. We've already had, in the last 24 hours, about 20 robins admitted," said Lori Bankson, Bay Beach Wildlife Sanctuary animal curator.
Terry Goettelman of Sturgeon Bay dropped off two robins at the Bay Beach Wildlife Sanctuary Tuesday morning.
"I have a soft spot for birds, and I see that they're struggling because of the snow, and we're trying to do everything we can," Gottelman said.
The birds typically don't eat seeds, so they scour area fruit trees, looking for food.
"These are the guys that are just getting back with other migrants. They're already thin, they're already tired," said Bankson.

In this episode of the podcast 1A, there is a great discussion about the current situation facing migratory birds in the Trump Administration.  MIGRATORY BIRDS for pete's sake!!  The episode description:

One hundred years ago, Congress passed a law to protect migratory birds — but our feathered friends could be in danger after a Trump administration decision limited the law's effectiveness. We discuss why one of America's oldest environmental laws now faces a new legal battle, and what this could mean for the birds — and the environment.


Now.  On to this - bunches all over the house: 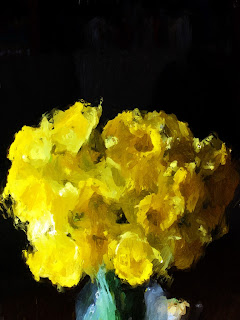 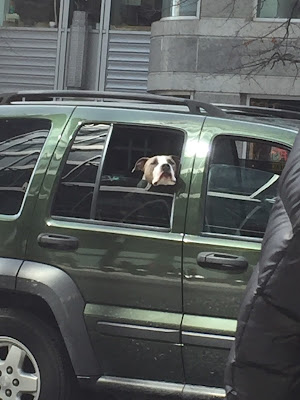 This is how you feel when you

in a car and really cannot find a comfortable position

for any length of time.


The ways we chose to propel ourselves from one place to another. Interesting.  Rebecca Solnit has that great book about Ireland, A Book of Migrations.  She writes (among many things) about walking across the West of Ireland, an area I am familiar with. I sometimes long to be there with such a fierceness that it surprises me.  A part of me feels at home there.

Four years  ago, on the train stuck somewhere around Pittsburg, I picked up a journal and started scrawling;

"Started my trip to DC yesterday.  There is something about train travel that I find calming - it puts me in a certain state of mind.  Maybe it is just the traveling period - but I don't think so.  On a train you get the voyeuristic delight of passing through other peoples lives - whether it is their graffiti or the junk that they have accumulated in their backyards or the lights they leave on late at night as the train howls through their little town."

I do remember driving to this town with Janelle once.  Making the decision to do so late one night - not calling our parents to say where we were until we had arrived.  Janelle had an aunt that lived here  Rita's sister I think.  I remember parking on a street that was wayyy up and on a hill.  I remember going to the door - and I remember someone opening the door.  Funny I don't remember anything after that. Mostly I remember the heady freedom of doing it.  Singing.  Probably smoking pot.  We just wanted an adventure.

Forty-some years later and I am l still loving the adventure.

Travel offers the opportunity to find out who else one is, the collapse of identity into geography I want to trace.....In 1968 I stood up in sophomore English and raged about having to read short stories on the day after students had been shot at Kent State.  I was told to sit down.  I don't remember any words of understanding or comfort.  Not long after that, I was in DC marching on behalf of ending the war and civil rights.  Those issues were driven by young people.

I was looking at a 2003 copy of APERTURE this morning and saw this image by Don McCullin (taken in 1968).    Perhaps this image struck me because I recently watched the AMERICAN MASTERS program about John Lennon.   Or because I saw images of Paul McCartney at the March for Our Lives in NYC.


The image is prophetic down to the glasses, and has been described that way before - particularly when it was published in A DAY IN THE LIFE OF THE BEATLES.

I was married, living in Duluth when Lennon was killed (12/8/80) and remember calling my high school boyfriend - just because I wanted to hear his voice.

'One of My Best Friends Was Killed in Gun Violence.' Paul McCartney Honors John Lennon at March For Our Lives 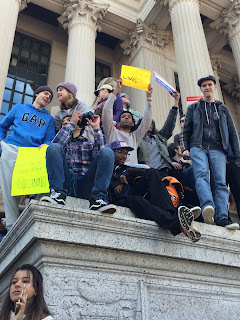 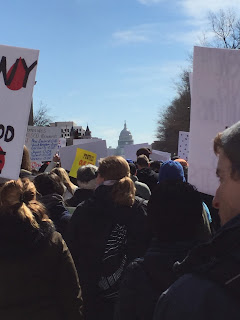 Still processing.
Posted by Unknown at 7:44 AM 0 comments